While I spend most of my time performing offensive security assessments (pentesting, red teams, web apps, etc), I have a side interest in DevOps, especially infrastructure and automation. Recently, I had some free time so I decided to check out Amazon’s continuous integration/deployment (CI/CD) tooling and apply it to offensive operations in the form of a payload server build pipeline. A payload server build pipeline is a particularly interesting idea to me for a number of reasons. Primarily, it allows team members to both codify their techniques into a single source of truth, as opposed to disparate sources like operator VMs, and to streamline the process of going from payload source creation to payload delivery to a target. In this post, I will specifically be covering using AWS CodePipeline to automate the deployment of genesis script (gscript) payloads to a payload server. 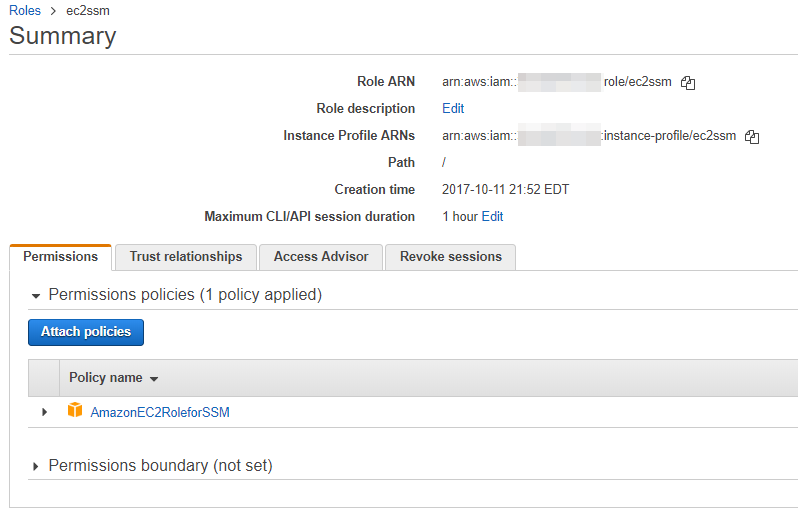 The only other component needed is a CodeCommit repository with a build configuration YAML file (buildspec.yml). 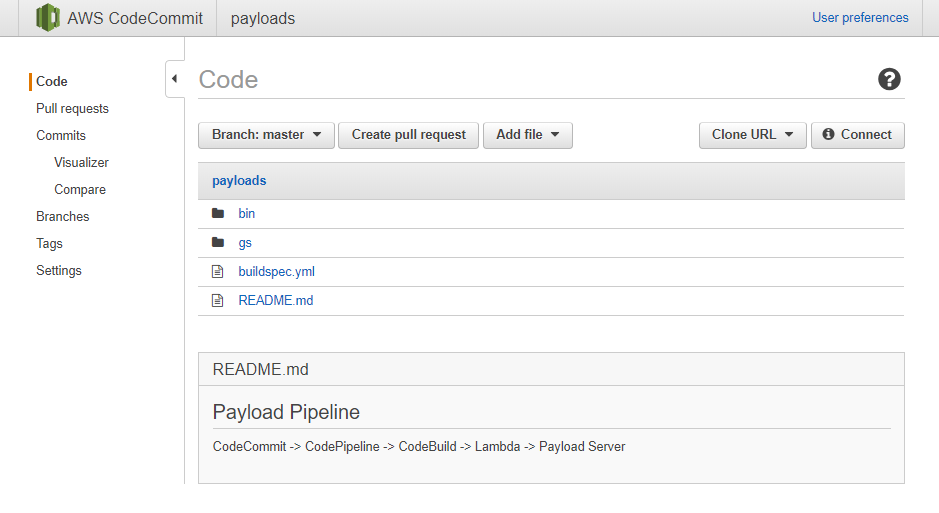 The directory structure can be whatever you choose as long as the buildspec.yml is in the root. For this project, I am using the gs directory to store the gscript payloads and the bin directory to stored the compiled executables.

Once the above prerequisites are met, we can create the pipeline. In the CodePipeline console, create a new pipeline that uses CodeCommit as a source and that points towards the payload CodeCommit repository. Keep in mind that the pipeline will trigger on each commit to the selected branch. To avoid triggering a build on every small change, consider using a staging branch for minor changes then merging them to the master cumulatively. 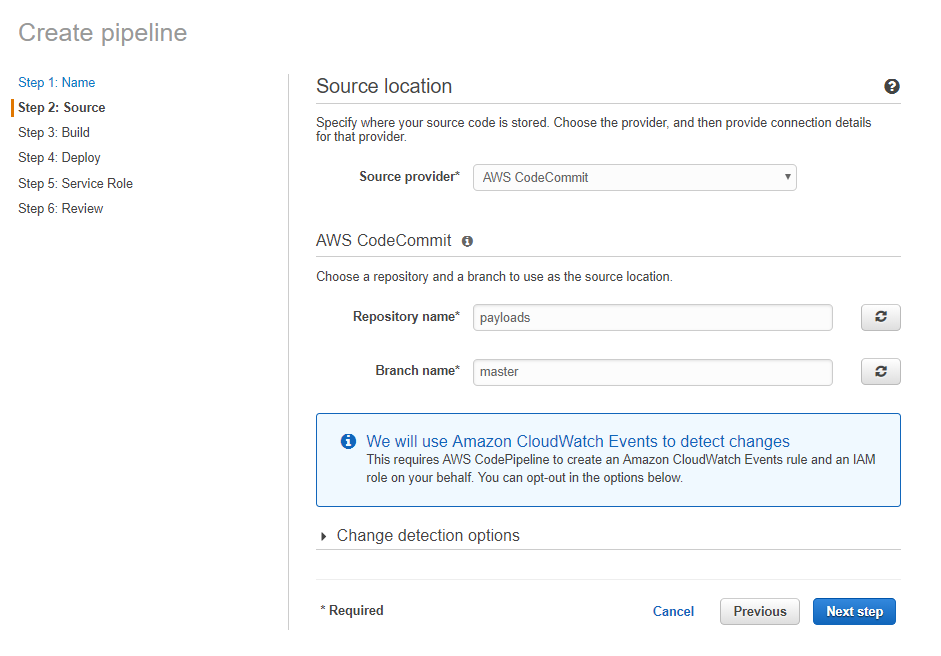 When setting the build configuration, we can leverage the existing gscript Docker image to perform the compilation. 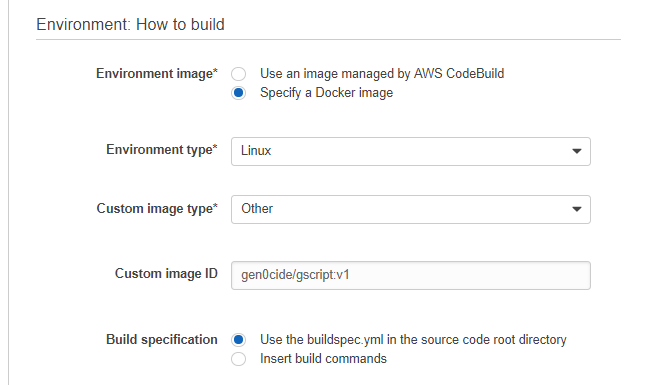 In the advanced settings, I added an environment variable called GS_ARCH, which will be used to tell gscript which architecture to build for; in this case amd64. 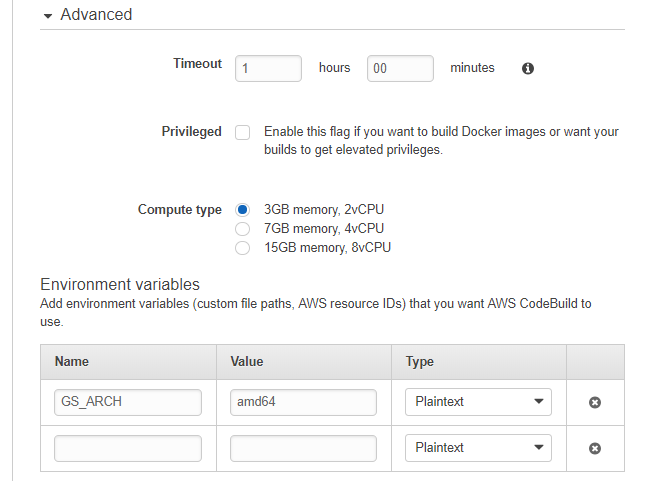 Once the pipeline is created, it should resemble the following: 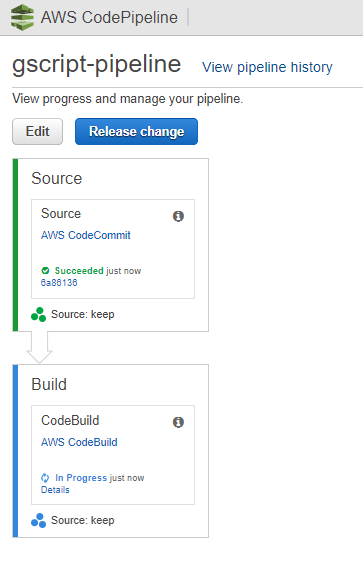 Now that the pipeline is in place, we need to complete the buildspec.yml so that the gscript payloads are compiled properly. Below is an example buildspec.yml that I used for this project:

Now, when a new gscript file is committed to the repository, the build will run, take each gscript file in the gs directory, compile them, and save them to the bin directory, which gets shipped to S3.

The final stage of the pipeline is to ensure the compiled files make it to the payload server. To do this, we can make a Lambda function that triggers when the CodeBuild process completes and pass the build artifact location to that Lambda. This Lambda will need to have permissions to send SSM commands to instances as well as put pipeline statuses to CodePipeline. Without pipeline permissions, the stage will appear to hang on being in-progress until it times out. Here is the policy I used for this project:

and the associated Lambda code, written in Python 2.7:

Once the Lambda is created, we can add the final stage to the pipeline.

Putting It All Together

To test the pipeline, commit a valid gscript payload to the gs directory of the CodeCommit repository. You can find example scripts here. The pipeline should trigger on the commit, build the executables, store them in S3, then serve them on the EC2 instance. If all goes well, the pipeline status should be green.

Additionally, you should see a successful SSM command in the SSM console

and the files in the payload directory

Hopefully this has provided you with an idea of how AWS CI/CD tooling can be used for offensive operations. While some of the methods in this post may not be particularly scalable, they can be used as a baseline when starting to create a payload server pipeline of your own.