We presented earlier this year at the RSA eFraud Global Forum on the topic of mobile app anti-tampering effectiveness.  The focus of this talk was on the runtime attack surface of iOS apps and the benefits of deploying self-defending techniques into higher risk mobile apps.  Since February we’ve continued to use runtime manipulation techniques to great effect in our mobile app testing and want to raise some awareness of the issue so that technology risk management and mobile development teams can up their defensive game.

Why care about the runtime?

It’s important to begin by stating that runtime protection is best suited for apps which need to run on untrusted devices (likely but not necessarily consumer devices) and contain local security logic or sensitive data on the device.  This is because security logic can sometimes be trivially manipulated in the runtime.  A simple example: an app’s local authentication is governed by a function running in memory which states isLoggedIn=false.  By accessing the runtime we can replace the false with true in real-time, or even completely replace the isLoggedIn method implementation with a version that always returns true.  We can change the value or replace the function wholesale in an unprotected runtime.  A few more examples:

The goal of runtime security is to achieve a comfort level that the app is self-defending and capable of operating independent of the device’s native security features.

While we just finished saying that runtime protection is for consumer apps, there is one notable Enterprise exception: Mobile Device Management / Application Management (MDM/MAM).  We have tested most of the major MDM/MAM tools at least once each over the past few years and have consistently used runtime manipulation methods to bypass device compliance checks such as Jailbreak/rooted detection.  We hunt down and “patch-out” the compliance checks one-by-one, then combine the modifications needed into a single library that is dynamically injected into the target app at runtime.

Using these methods, we’ve demonstrated (at the direction of our clients) to some of these vendors that through runtime hacks their master encryption keys can be stolen (thereby decrypting a protected container) or a container’s local passcode can be brute-forced once compliance checks are fooled.  MDM/MAM apps should be among the most secure on the planet and most (still) don’t use advanced runtime protection. Their lessons should be a cautionary tale for high-sensitivity consumer apps, which typically cannot rely on controls such as passcode or device integrity.  Adversaries can cut straight to the work of runtime manipulation without first having to strip out pesky layers of jailbreak detection.

While runtime manipulation is also applicable to Android, we will focus on iOS for the remainder of this article.  Any attack begins with reconnaissance, and there are several methods available to profile an iOS app and identify the classes and methods (business logic) worth targeting.  This process begins with class-dump-z to obtain a view of the application’s custom business logic, then involves detailed tracing of the application to observe its runtime behavior.  Once interesting functions are found, three main tools facilitate the manipulation: GDB, Mobile Substrate and Cycript. 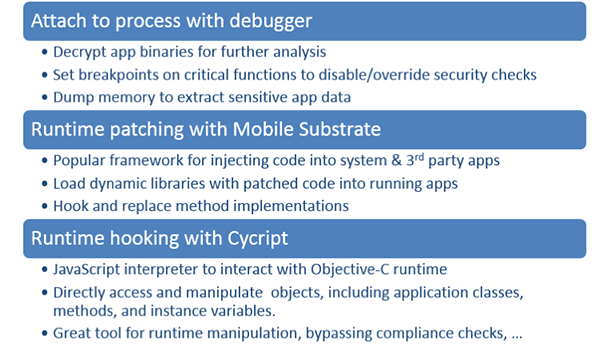 Now that we’ve discussed the potential impact of runtime manipulation, let’s take a brief look at the many different mobile app protection strategies, ranging from built-in platform to more advanced runtime protection measures such as anti-reversing and integrity checking.  The table below identifies a number of different protection methods, with our view on varying degrees of effectiveness and level of effort to implement. 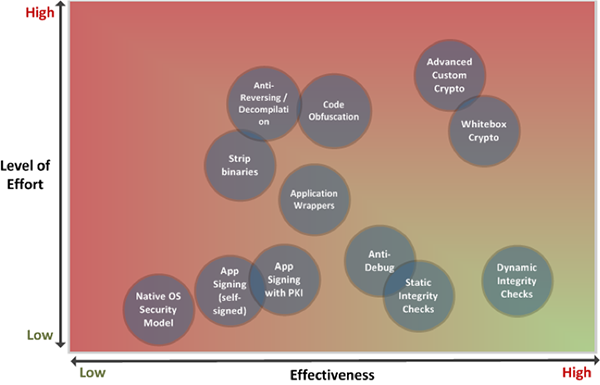 Our diagram quickly points to what we believe is a high return and lower integration effort – dynamic integrity checking.  This control aims to protect the runtime integrity of the app by preventing the attacker/malware from changing code which is running in memory.  This approach injects a large number of integrity checks into the code to detect tampering activity and take evasive action, such as silently wiping user data and keys, preventing further app execution, and possibly sending alerts to an administrator or backend fraud engine.  For example, when someone attempts to hook a method in your app and replace ‘isCompliant=false’ with ‘isCompliant=true’, the activity will be detected as an unauthorized code injection attempt and the app can be shutdown.  Note there is likely little “customer experience” risk since that kind of tampering is not going to be mistaken for legitimate user activity.  As in our previous examples, it’s just evildoing.

Case Study: Before and After Effects of Dynamic Integrity Checks on Runtime Manipulation Attacks

We recently evaluated a commercial mobile app anti-tampering solution, testing the app in its naked state (which actually had some built-in jailbreak detection) and then the same app with dynamic integrity check protection.  We used our standard iOS toolkit to target the application runtime, including tools such as GDB, Cycript, MobileSubstrate, and the excellent Snoop-it tool created by Andreas Kurtz.  During our testing we noted the following outcomes:

Phil manages the software team that develops and maintains VECTR, a free purple team planning and tracking platform, and continues to work with large organizations to lead purple team assessments, product security testing at scale, and advise on leading security practices and tools/capabilities for cloud and on-premise environments.

Recent conference events include presenting the VECTR platform at Black Hat’s Arsenal in 2019 and presenting on a purple teaming case study at the FS-ISAC Fall Summit 2019 event.

This author does not have any more posts.