If you’ve ever tried to visit a website and mistyped the URL, it’s possible you’ve encountered a typosquatting domain.  Typosquatting, formally defined, is a technique used by malicious actors where they register domain names that appear similar to legitimate domains.  The new domain is often used for the purpose of phishing the legitimate domain’s users or customers.  These domains may be one letter off from the original domain (think legitimate-companyy.com vs legitimate-company.com), or employ other techniques, such as the use of homoglyphs (legitimaｔe-company.com, where the “t” is replaced with a full-width Latin small letter T, Unicode FF54).  Typosquatting is often used for email-based attacks, either as a sending domain for emails or for phishing links.

Registering a typosquatting domain, as noted in MITRE’s PRE-ATT&CK framework, is easy for an adversary, as domain registration is relatively cheap (or in some cases, free).  Recently, for example, digital risk protection company Digital Shadows detected more than 550 candidate-related and election-related domains for the 2020 United States presidential election.

In order to protect against typosquatting, cyber defenders need effective tools to monitor domain registration for potential abuse.  While commercial domain monitoring solutions assist in detecting these attacks, there are also open source projects with similar goals.  Marcin Ulikowski’s dnstwist, an existing open source tool, generates fuzzed variants of a domain name and checks whether they have DNS records. To monitor for and detect potential typosquatting of our clients’ domains, and in the SRA spirit of innovation, we have configured and operationalized this tool to run daily scans for potentially malicious domain doppelgangers.  dnstwist-monitor is a collection of AWS resources driven by a Lambda function that runs dnstwist and generates alerts based on new discoveries.

dnstwist-monitor allows a security team to receive alerts on the discovery of typosquatting or other domains lexically similar to domains they’d like to monitor.  This allows the team to better protect the reputation of the organization and their brands.  The setup is light and it can integrate into an existing ticketing system like Atlassian Jira shown below. 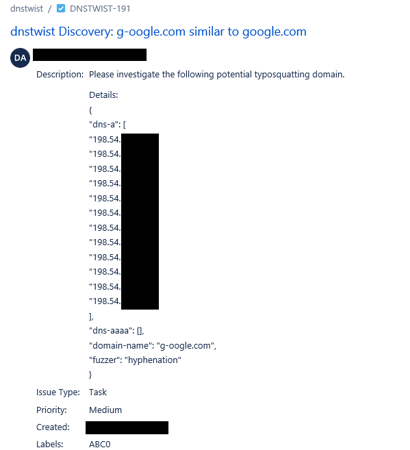 This ticket provides information for an analyst to start investigating the domain and a place to document their findings.  The analyst can use online lookup tools to establish the veracity of suspect domains, including, but not limited to, whois information or historical DNS records retrieved from a tool like SecurityTrails DNS History. If the analyst determines the domain poses a risk, they can escalate for further action.

Amazon Web Services (AWS) was chosen as the cloud-computing backbone for this project for its flexibility, scalability, and speed when provisioning resources.  We can adjust the code and services running on the fly, allowing for rapid development without the hassle of managing on-premise resources.  AWS Lambda also allows us to schedule the execution of this task any pay only for the time our code is running, as opposed to leaving a server or virtual machine running 24/7 only to be performing a job part of the time. 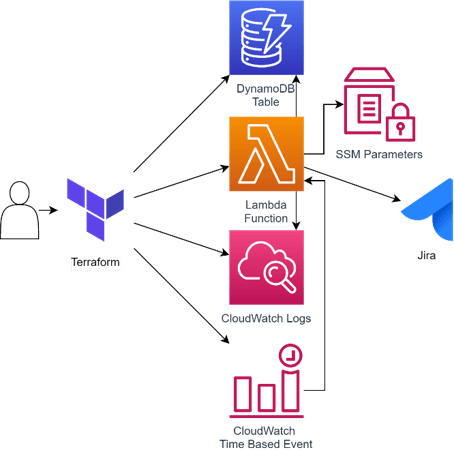 Figure 3 – Test Event in the Lambda Console. This is the format for the JSON object passed in from the CloudWatch rule.

When the Lambda function invokes, it runs dnstwist with the legitimate domain as input.  This generates many variations of the original target domain based on several fuzzers.  For example, Google.com might have a set of many variations including, but not limited to: g00gle.com, googl.com, or even ģoogle.com (xn--oogle-71a.com).The results are stored in a temporary file while a query is made to DynamoDB, AWS’s NoSQL database solution.  Because Lambda functions are stateless, there isn’t a way to save a history of observed domain permutations within the function itself; DynamoDB presents a solution to this state problem.  If a domain hasn’t been scanned by dnstwist-monitor before, the database is populated with all dnstwist findings.  However, if a domain has been denoted before (meaning this is not the first run for this legitimate domain), dnstwist-monitor checks to determine if there are newly found domains that aren’t already logged.  With this information, dnstwist-monitor proceeds with the logic for new detections and adds those domains to the database.

Figure 4 – Selection of discoveries for Google.com stored in DynamoDB

For each newly found domain, we opted to have the Lambda function create a Jira ticket for our tracking.  This way, we allow an analyst to assign the ticket to themselves and add relevant investigation notes.  If the analyst determines the domain is malicious, we can escalate this information.

HashiCorp’s Terraform is used to define the infrastructure needed for dnstwist-monitor and standardize its deployment to AWS.  The configuration provided in dnstwist-monitor’s repository will create the following resources:

This Terraform configuration creates separate resources and IAM roles for every domain to be monitored so resources from one client cannot interact with those from another.

Install Git, if you do not already have it, and use this to pull down the repository.

Ensure you have Python and pip installed.  dnstwist-monitor has been tested on Python 3 (note that Python 2.7 will not be maintained as of January 1, 2020).

Follow Amazon’s guide on installing the AWS CLI; linked are the instructions for installing with Python’s PIP, but other methods are provided on the linked page’s navigation. 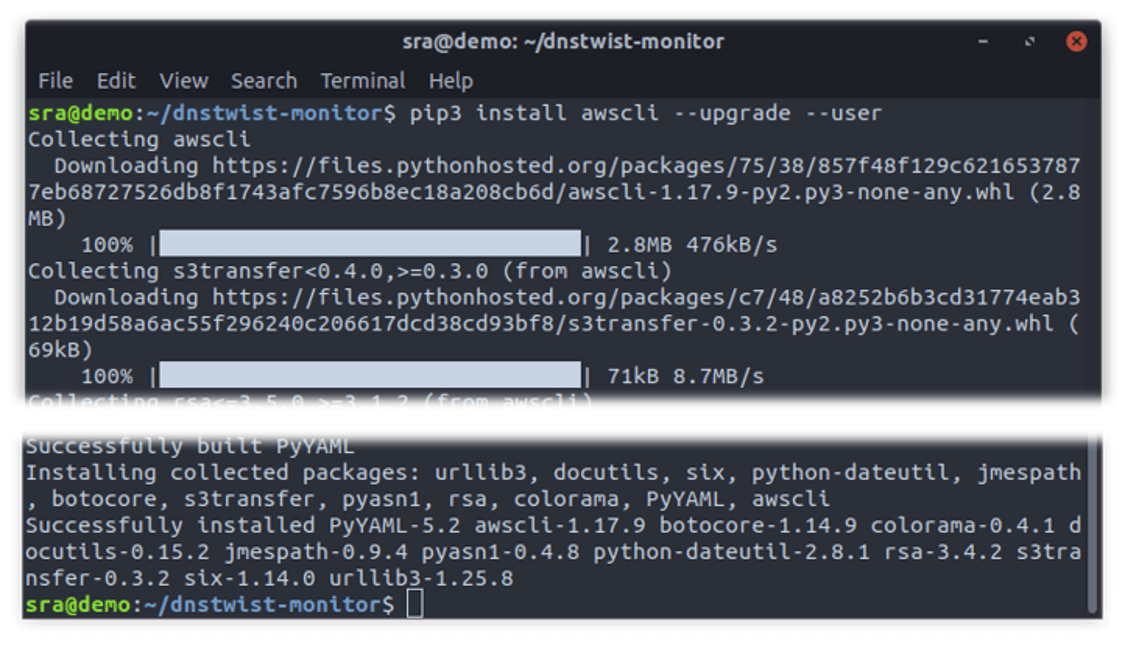 Follow the instructions on the linked guide to add your AWS access key.  Next, install the libraries required for dnstwist.

To deploy, be sure Terraform is installed on your host. 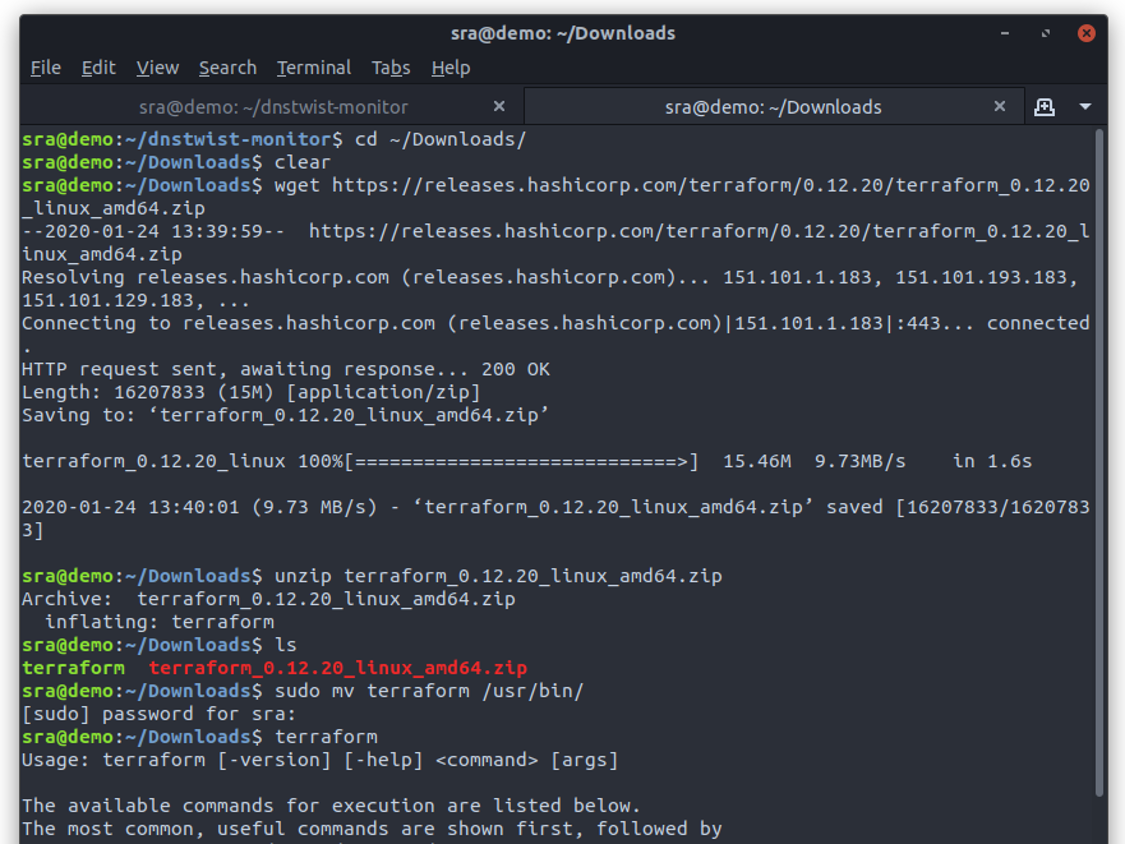 Once filled out, change back to the root directory for the dnstwist-monitor repository.  To initialize Terraform, build the function, and deploy the configuration to AWS, run “make clean tf-init build tf-apply”.

In a few minutes, the function and all associated resources are deployed!

Where Can I Find dnstwist-monitor?

Pat focuses on developing and improving SOAR playbooks and running Purple Team Essentials engagements from both a blue and red team perspective. He is also a member of CSOC’s Security Engineering and Advanced Response (SEAR) team, where he provides architecture and engineering support and insight, maintains infrastructure and configuration automation, and contributes to research and innovation projects.

He has worked with companies across multiple industries, including pharmaceutical, healthcare, business services, and financial services.

Prior to joining SRA, Pat played roles in SOCs in the insurance and healthcare industries. He holds a degree in Security & Risk Analysis from The Pennsylvania State University.